Overnight camping would have been a good experience in Rizal Province, but knowing my strict parents, I have no choice but to settle on a Rizal Day Tour for Paul and I’s 5th Anniversary. It was still fun, though, a little fast-paced due to our limited time, but it was a lovely celebration. We visited Treasure Mountain and El Patio Razon in Tanay, Rizal then ended the night in the new overlooking restaurant in Binangonan, Rizal – Art Sector.

We were both from Rizal Province and have been to a lot of Rizal famous destinations, one place at a time. This trip was our first time doing a fully-packed Rizal day tour trip. So if you’re from outside Rizal, here’s how we maximized our whole day to see some of Rizal’s hidden gems.

HOW TO GO TO TANAY, RIZAL

Paul and I already met at around 9:30 AM in Sta Lucia East Mall along Marcos Highway in Cainta, Rizal. We drove to Tanay via Marcos Highway, following Waze’s instructions. Treasure Mountain and El Patio Razon are just 5-minutes away from each other, so it is recommended to drop by the other if you’re visiting one of them. Since it was a weekday when we went, there was no traffic, and our drive went smoothly and fast. We passed by Masungi Georeserve before we saw the Treasure Mountain signage along the road.

P.S. There’s no internet signal on most of Marcos Highway after Antipolo, so better search for the place when you’re still in the city area.

Double P.S. The road to Treasure Mountain is still not fully cemented, so if you have a low-bumper sedan car, it will be hard for you.

Ride a van or jeepney (P24) to Cogeo Gate 2 in Araneta Gateway Terminal. From Gate 2, ride a jeepney (P45) bound to Sampaloc, Tanay, and get off at Sitio Maysawa waiting shed. This place is also the jump-off place for the Maysawa Circuit hike. From there, you can either hike 45-minutes to Treasure Mountain or ride a habal-habal (P50) to bring you up. As long as you have ridden a jeepney to Sampaloc, Tanay, don’t be shy to tell the driver to drop you in Treasure Mountain.

Treasure Mountain is known as the mountain with a summit-like view without the hardships of hiking. It is also a famous camping site in Tanay where if you’re lucky, you can witness a beautiful sea of clouds early morning. We arrived at lunchtime already, with the sun shining high, so I’m not really expecting a sea of clouds view. Maybe someday when I go back for camping.

In Maysawa Road, there’s a Treasure Mountain signage in a big gate. From the entrance, we still drove in a muddy road for almost 10 minutes up to the parking and registration booth. There were just three other cars parked, but the motorbikes were more than ten. The sun was up high, but it was chilly because of the strong winds. We paid the P150 day tour fee, and the receptionist stamped their logo on our wrists.

It was already nearing lunchtime, so we decided to eat first. Just near the registration booth was the canteen that sells various meals that I didn’t expect due to its location. It was a little pricey, but that’s something we can expect on somehow remote tourist spots like this.

After lunch, we walked to their viewpoint that I mistakenly thought was a chapel first due to the cross on top. It turned out to be just a camping site as well for those who prefer to camp under a roof. The viewpoint has different levels where you can set-up your tents overlooking the mountains of Sierra Madre. We sat by the benches around, took some photos and video clips, then absorbed the beautiful view.

Treasure Mountain is the perfect camping site for the first-timers who don’t have any clue on the hows yet. Or for people who prefer to camp in comfort. It is an enclosed safe place, there are restrooms too, and most of all there’s a canteen where you can just buy food. I tried camping before in Kalanggaman Island and, by experience, found it hard due to the bathroom and cooking restraints and hassles. So when I saw the camping situation here in Treasure Mountain, I would definitely go back for overnight camping.

The place is gorgeous and would have been more if we experience it on a sunrise.

Just a few minutes away from Treasure Mountain is the Bali-inspired resort of El Patio Razon. We paid P80 for the entrance fee, and there’s nothing much to do but to take photos and the famous Kawa Bath. The mountain view in Treasure Mountain was a lot more gorgeous, but given my aesthetic self, I enjoyed the Bali-inspired photo spots. It was perfect for that anniversary photo!

There were four photo spots you can take your Instagram photos on. But aside from it, El Patio is also famous for the Kawa Bath with a view for P300. We planned to try it, but we didn’t anticipate how cold the wind would be on a February afternoon. We will try again next time when we go back for Treasure Mountain or other resorts in Maysawa.

We explored the place a little more and most of the visitors are couples like us. There’s no lunch available here so it’s better to go on an afternoon and they only have one cottage where you can hang out. They have one huge cabin that you can rent which for me is not worth it due to the limited view and activities you can do. They also have a mini flower farm and a Hobbit house on the other side of the resort.

Ending the day in Art Sector

One thing we loved doing during our anniversary is to end the night in an overlooking bar or restaurant. It’s a ritual that we committed since our first anniversary in Bayleaf Intramuros. So when I saw this newest overlooking restaurant in Rizal, I instantly reserved it for our 5th anniversary to take a break from building views in the city.

We arrived just in time for sunset and the cold breeze of Tanay mountains were gone once we set foot in the town of Binangonan. Art Sector was an hour drive away from Maysawa and the traffic had already built up in the town proper.

The restaurant is a screaming Pinto Art Museum the moment you entered. We went on a Wednesday and the place was still crowded. The caretaker told us that during weekends there were lines outside. Wow. We paid the P100 entrance fee and searched for an empty table near the window.

There were many empty tables despite the crowd. It seemed like other guests had just paid the entrance, took some photos, and sat by the sofas around the place and rooftop. We decided to hang out by the rooftop as well to watch the sunset first before we eat. We talked about how our province continues to amaze us and planned to really explore more of it this year. We talked until the sun was gone in the view of Laguna de Bay and the buildings of Manila.

By dinner, we ordered a pizza and a pasta for sharing that costed us around P700+. The food was below average for our taste. The pasta lacked flavor, while the pasta’s dough has a floury and starchy taste. Most of their bar menu as well were unavailable. We hope they improve their food and their limited menu.

We still enjoyed the view here though despite their lack in food and service area. The twinkling city lights made our dinner romantic and just the right place to end our anniversary. The place as well just opened so I really hope they improve on it especially with the entrance fee that they imposed.

LOVE THIS ARTICLE? WANT TO HAVE A RIZAL DAY TOUR SOON? 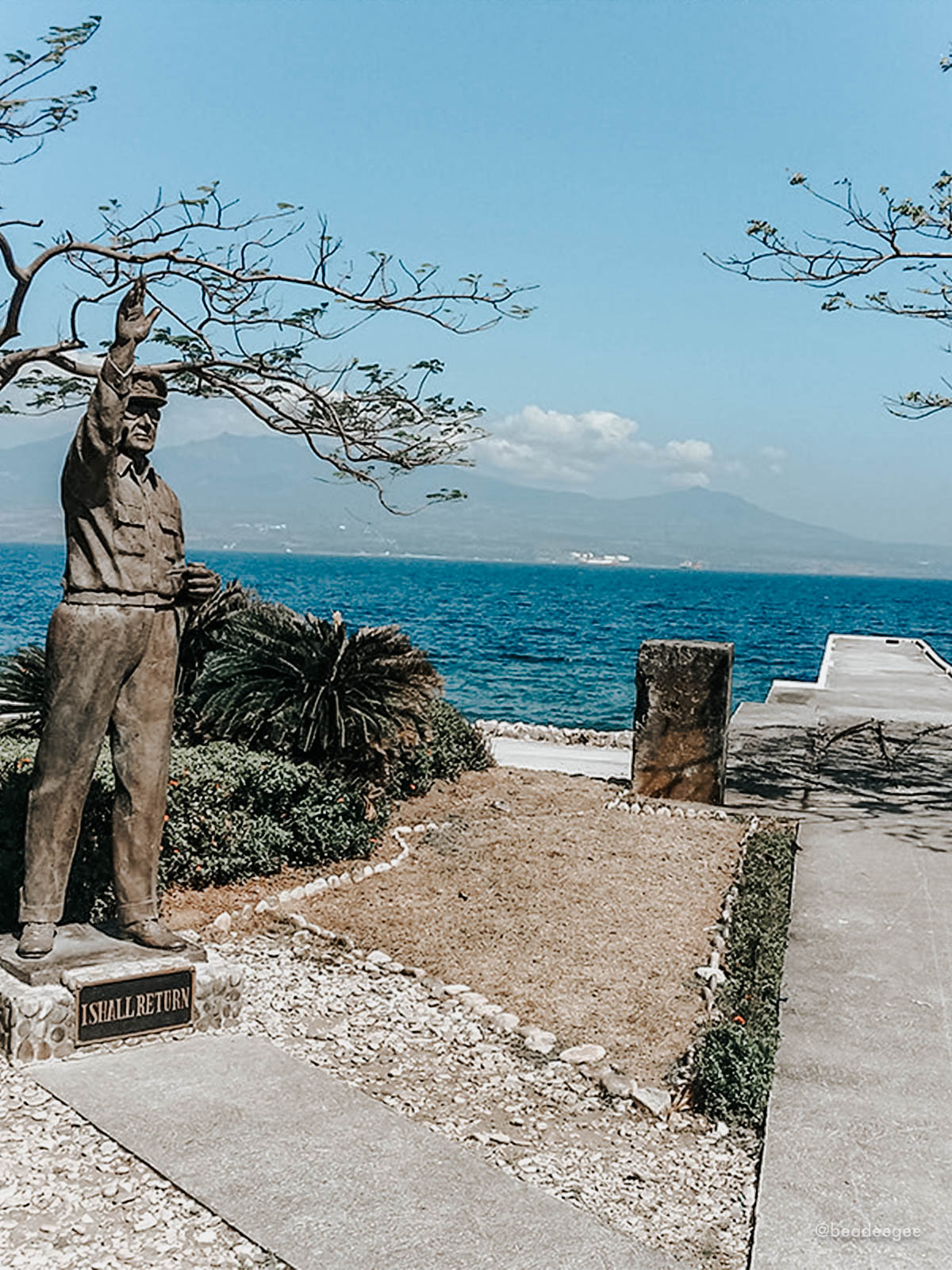 12 Reasons Why You Should Join a Corregidor Island Tour 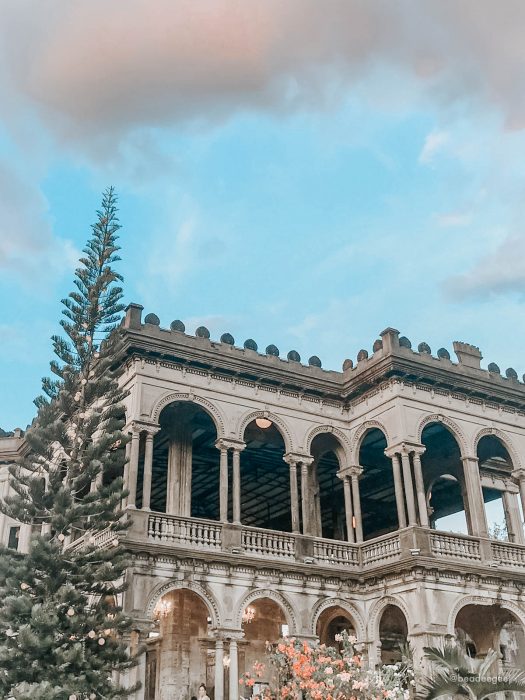 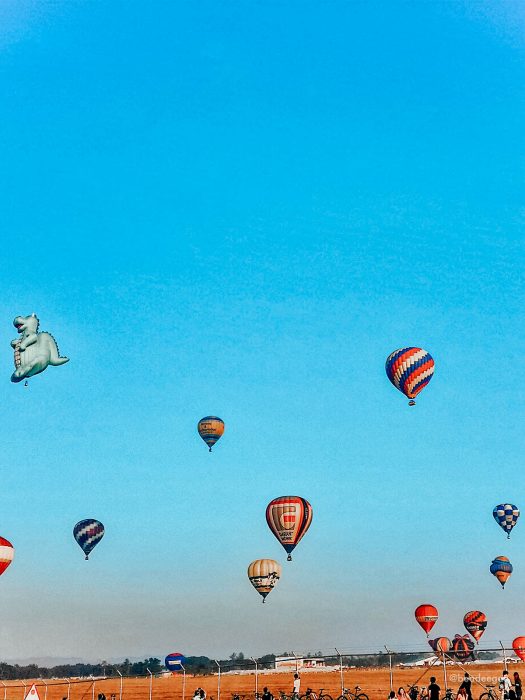